Dana Milbank had lots of fun mocking Donald Trump in his recent Washington Post column, after Trump turned a Yiddish slang word for penis into a verb and said Hillary Clinton got “schlonged.” 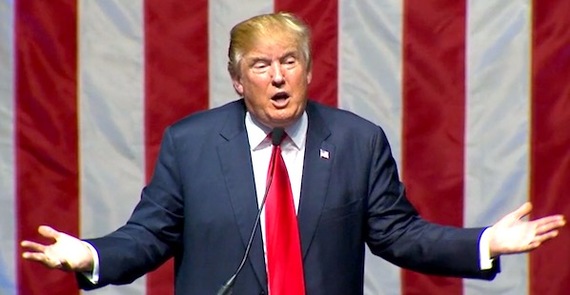 Taking on Trump, Milbank shared an array of real Yiddish insults and imprecations, among them choice expressions like “Go shit in the sea!” (Gai kaken oifen yam)–though Milbank delicately used the word defecate. And of course he’s transliterating, because Yiddish is written with Hebrew letters.

Milbank thinks that “Yiddish insults are custom-tailored for the overbearing and boorish gantseh macher [big shot, used sarcastically] that Trump has made of himself.”

Really? His column reinforces stereotypes of Yiddish as some uniquely vulgar language with a gift for invective, as if other languages don’t have just as many insults (or more) that could dissect and dismiss Trump.

So what if you can call Trump a putz and a schmuck in Yiddish? Plenty of languages have synonyms for “prick.” And mamzer is a bastard, from the Hebrew. Big deal.

In his litany, Milbank unintentionally called Trump a criminal when he used the word “farbrecher” (which he also transliterated incorrectly). I suspect he was relying on websites that say it means “con man,” but you can also find websites supplying quotations that famous writers like Mark Twain never said. Milbank should live and be well and use an authoritative source like Uriel Weinrich’s English-Yiddish/Yiddish-English dictionary which defines it correctly.

But where Milbank goes way off the rails is near the end with this supposed gem of sarcasm in Yiddish:

This is actually mostly somewhat incorrect German with a bit of Yiddish (from one perspective), or just farkakteh German. But it’s definitely not authentic Yiddish the way most of his other phrases are. It also appears with the glaring typo “class” for “dass”–which tells me it’s lifted directly from the Web, because that’s how it appears on a number of sites.

Why does any of this matter? It shows that Milbank was sloppy and didn’t do his homework, which is even more obvious in the column’s last words.

Milbank ends the column with what he thinks is Yiddish for “Thank God!” (Danken Got) but isn’t. How do I know? Because I grew up in a Yiddish-speaking home and one of my parents had taught Yiddish. Got tsu danken!

Milbank should stick to English.

Lev Raphael is the author of 25 books in genres from memoir to mystery and teaches in the English Department at Michigan State University.

The Art of Killing