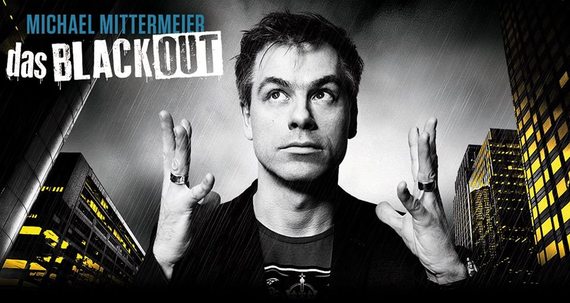 If these words come to mind when you think of how funny German can be, then wait till you see Bavarian comedian Michael Mittermeier’s culturally reflective new show, Das Blackout at the Culture Project. Michael, an erudite fellow, lived in New York after 9/11 and has a deep affection for the simpleness of the American education. When he relates a story about a mythical ‘Tiffany’ asking him questions about world history, primarily because he is an educated German, you really get the shock and awe that the rest of the world experienced when the U.S., as in Bush, not us, decided to invade Iraq. Michael has a way of mixing politics and cultural observations that is both wry and perceptive — like Germany’s devotion to the environment, while at the same time being the world leader in car manufacturing.

But lest you think he is all head, think again. His “Fritz’, the everyman German who appears in WWII movies as the lug who guards the gate, is hilarious. For a handsome man, he has a very mobile face, and superb comic body gestures. His frightened “chicken Japanese walk” is beautifully accomplished and a visual scream.

Comedian Eddie Izzard has spoken highly of Michael and it’s easy to see why. They both come from a highly intellectual platform. Sure, Michael makes jokes about German lovemaking sounds, but he is never grubby for the sake of a cheap joke. He is always saying something deeper, and much about the perceived view of Germans since the wars and the legacy left behind of German traits from shows like Hogan’s Heroes.

When he tells us how German parents in the fifties never mentioned the Nazis and in fact, said that they didn’t know anything ‘because they were all on vacation in another country at that time’, you get the point. Michael’s generation has accepted the generational guilt which has given him much fodder.

The only thing that I missed in this very timely German correctness being an hour and 29 minute show, is his non-jokes about Jews. He starts out asking how many Jews are in the house, and later jokes about Greeks and French, but never really goes back to the big questions: Why did Martin Heidegger date a Jew and what do Germans and Jews say when they make love? Vundabar!

The Art of Killing