Part One – We Met 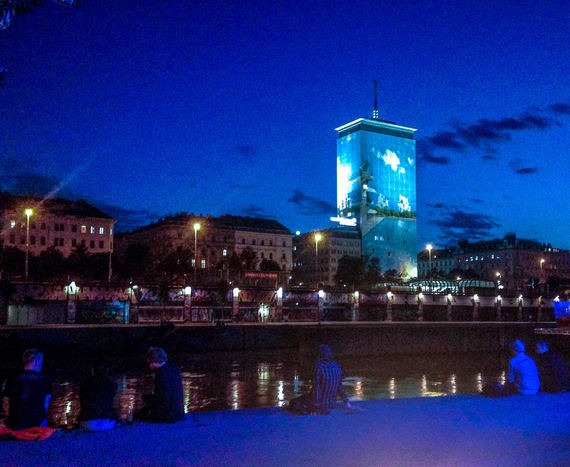 Chris. The German’s name is Chris. Of all the German names, his is not even really German at all. But I guess, since he’s German, so is his name. Kryss (this is so less confusing when typed since they actually spell it different), being my little den mother and travel wife, did not want me to meet Chris alone. So, when I told her I was going on a date with a cute blonde German from Tinder, she insisted on tagging along.

We meet him off of Schwedenplatz. I am looking for a guy in a black tank top. He is facing the other way. Kryss yells his name loudly. I turn bright red, desperate for cover, so embarrassed. I scold Kryss for acting American, although she’s Canadian, and he walks toward us. I believe he accuses me of yelling and I quickly pass the blame. I know better, at least.

We find a “beach bar” off of the canal. We order three beers and talk. Kryss is very chatty, which is good because I’m nervous and the beautiful man keeps staring at me when I’m looking at Kryss. He thinks he is being slick, but I can feel his presence, can sense him looking. I try terribly hard not to blush, but it is damn near impossible.

Kryss needs cigarettes. She disappears into the night. Kryss is terrible at directions so I know we have a while. My first beer is gone. Now there’s a second. We talk. I feel comfortable, at home. Our body language says it all. We are leaning in close. I get cold; he gives me his jacket without a second thought. His jacket smells like his cologne. I don’t ever want to return it to him.

It’s been at least twenty minutes but it feels like twenty seconds when Kryss returns. She says she’s been back a while and has been watching us, giving us more time. I’m thankful but I can tell Chris wishes it had been longer. We talk more. We drink more.

I’m finally drunk enough to propose the photo booth. Chris and I slip away behind its curtains. I’m suddenly very aware of how small a space we are sharing. The bench is tiny so I sit on his lap. 1, 2, 3. Snap. We weren’t ready. The photo is terrible.

The next time, we are ready, silly faces aimed at the camera. The third time, we smile normally. On the last photo, he turns my chin toward him and presses his lips to mine. We don’t stop when the photo is done. Suddenly he is standing, pushing me back on the bench, crushing his body on top of mine, his hands searching my hair, my arms, my torso. He grabs the beer from my hand and sets it on the ground beside him. I explore his body with my fingers, noting how in shape his is. I am breathless and hot. I can’t stop. I can’t pull away. I want this moment to last forever.

But Kryss is still at the table, waiting. We can’t stay here. We pull way, panting and laughing. I pick up my beer. We join Kryss again, our hair slightly tousled, evidence of what just occurred.

It is last call. We order one more and sit on the ledge of the canal, our feet dangling over the edge. I am between the two of them and feel so much love. Kryss and I debate abortion. This is strange, but we are drunk, and passionate, like most intoxicated people tend to be. Chris listens intently. Later, Kryss will tell me about how Chris had stars in his eyes when I spoke of Jude, my three year old son. I saw them, but I thought it was just the haze of the alcohol. I didn’t realize it was a truth.

Every chance he gets, he tells me I am beautiful. He says things like, “you’re lovely.” He touches me, any chance he gets, as if he has to know I’m real, as if I’m just this crazy mirage he’s dreamt up. He talks about how he rarely gets matches on Tinder, he talks about flying a plane (he’s a pilot), he talks about Cologne, the town in Germany he is from. I think I propose to him every five seconds, telling him we must get married. He thinks I’m kidding. I wonder to myself if I am. Am I really crazy enough to marry a stranger?

He has amazing English, but a strong German accent. He has dirty blonde hair, scruffy facial hair, blue eyes you can get lost in. He is slender but muscular. He is caring, considerate, a gentlemen. He is curious, intent, direct. He is this magical man that I never in a million years thought really existed.
I knew this in one night. That’s all it took. He stayed with me. It was magical. And when he left the next morning, I wondered if I’d see him again. I wondered if the night before was just a dream. It was too good, way too good to be real.

But it was real. And he comes back, each time better than the last. So that is why it has been two weeks. Two of the longest weeks of my life, missing a guy who is in a time zone six hours ahead of me, hoping that I’ll get a text, even the simple “Hey pretty” he sends. All I have left are the memories, and the texts that come at all hours of the day and night, because now that we are apart, it is so hard to stay in sync.

Want to read what happens next? Check out Part Two & Part Three of my story about The German!
_____

Hi! I’m Katie. I am mid-twenties self-proclaimed “goal digger” and “boss babe” currently working on my MFA in Creative Writing (fiction) while working full time as a Case Manager for a pharmaceutical company. I’m an army brat turned country girl living in Raleigh, NC with my rambunctious three year old son. I write about my struggles and triumphs of being a single mom navigating through dating, finding time to travel, and writing about pretty much anything I can think of. You can keep up with my stories at www.writingandwanderlust.me. Find me here too: Instagram / Pinterest / Facebook / Twitter